Homelessness Declines in Most Communities of the U.S. with Increases Reported in High-Cost Areas 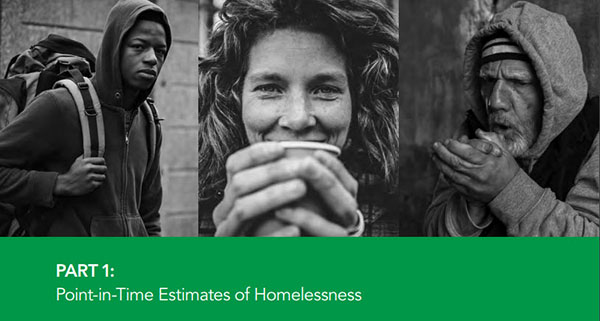 Homelessness crept up in the U.S., especially among individuals with long-term disabling conditions, according to the latest national estimate by the U.S. Department of Housing and Urban Development (HUD). HUD’s 2017 Annual Homeless Assessment Report to Congress found that 553,742 persons experienced homelessness on a single night in 2017, an increase of .7 percent since last year. Homelessness among families with children declined 5.4 percent nationwide since 2016, while local communities report the number of persons experiencing long-term chronic homelessness and Veterans experiencing homelessness has increased.

There is a great deal of variation in the data in different parts of the country, however, and many places continue to see reductions in homelessness. Thirty (30) states and the District of Columbia reported decreases in homelessness between 2016 and 2017. Challenges in some major metropolitan areas, however, have had a major impact on the national trend lines.

For example, the City and County of Los Angeles reported a nearly 26 percent increase in overall homelessness since 2016, primarily among those persons found in unsheltered locations. Meanwhile, New York City reported a 4.1 increase, principally among families in emergency shelters and transitional housing. Excluding these two areas, the estimated number of Veterans experiencing homelessness in other parts of the nation decreased 3.1 percent since 2016.

“In many high-cost areas of our country, especially along the West Coast, the severe shortage of affordable housing is manifesting itself on our streets,” said HUD Secretary Ben Carson. “With rents rising faster than incomes, we need to bring everybody to the table to produce more affordable housing and ease the pressure that is forcing too many of our neighbors into our shelters and onto our streets. This is not a federal problem—it’s everybody’s problem.”

“The fact that so many parts of the country are continuing to reduce homelessness gives us confidence that our strategies—and the dedicated efforts of communities to embrace best practices—have been working,” said Matthew Doherty, executive director of the U.S. Interagency Council of Homelessness (USICH). “At the same time, we know that some communities are facing challenges that require us to redouble our efforts across all levels of government and the public and private sectors, and we are committed to doing that work.”

“Our joint community-based homelessness efforts are working in most communities across the country. Despite a slight increase in overall Veteran homelessness, I am pleased that the majority of communities in the U.S. experienced declines over the past year,” said U.S. Department of Veterans Affairs (VA) Secretary David Shulkin. “VA remains committed to helping Veterans find stable housing. We will continue to identify innovative local solutions, especially in areas where higher rents have contributed to an increase in homelessness among Veterans.”

HUD’s national estimate is based upon data reported by approximately 3,000 cities and counties across the nation. Every year on a single night in January, planning agencies called Continuums of Care (CoCs) and tens of thousands of volunteers seek to identify the number of individuals and families living in emergency shelters, transitional housing programs and in unsheltered settings. These one-night ‘snapshot’ counts, as well as full-year counts and data from other sources (U.S. Housing Survey, Department of Education), are crucial in understanding the scope of homelessness and measuring progress toward reducing it.

On a single night in January 2017, state and local planning agencies (CoCs) reported:

Homelessness Among All Persons

The total number of persons experiencing homelessness on a single night last January is 553,742, an increase of 0.7 percent from January 2016 largely attributed to the jump in unsheltered homelessness in larger cities in the West Coast.

There were 58,000 families with children experiencing homelessness on a single night in 2017, a decline of 5.4 percent from the year before and a 27 percent reduction since 2010. These significant reductions in family homelessness is largely attributed to the expansion of Rapid Rehousing Programs across the country and a concerted effort by local planners to reallocate scarce resources in a more strategic way. These ‘Housing First’ models have proven to be a more effective and efficient response to families experiencing temporary crisis as well as those enduring the most chronic forms of homelessness.

Local communities reported a total of 40,056 Veterans experiencing homelessness in January of 2017, an increase of 1.5 percent since 2016, primarily in the City of Los Angeles and Los Angeles County. Excluding this area, the national homelessness estimate among Veterans decreased 3.2 percent since 2016. However, as a consequence of intense planning and targeted intervention, homelessness among Veterans has been reduced 46 percent since 2010, prompting a number of States and local communities to declare an effective end to Veteran homelessness in their areas (read more about the Mayors Challenge to End Veteran Homelessness). This decline is largely attributed to the close collaboration between HUD and the VA. For example, since 2010, more than 480,000 veterans and their family members have been permanently housed, rapidly rehoused, or prevented from falling into homelessness through HUD’s targeted housing vouchers and VA’s homelessness programs.

Long-term or chronic homelessness among individuals with disabilities declined 18 percent since 2010. This reduction is due in part to a concerted effort to make available more permanent supportive housing opportunities for people with disabling health conditions who otherwise continually cycle through local shelters or the streets. Research demonstrates that for those experiencing chronic homelessness, providing permanent housing, coupled with appropriate low-barrier supportive services, is the most effective solution for ending homelessness. This ‘housing first’ approach also saves the taxpayer considerable money by interrupting a costly cycle of emergency room, hospital, detox, and even jail visits.

HUD’s 2017 homeless estimate points to a significant increase in the number of reported persons experiencing unsheltered homelessness, particularly in California where there is a significant lack of affordable housing. Last January, Los Angeles and Los Angeles County counted a total of 55,188 individuals living in sheltered and unsheltered settings, an increase of nearly 26 percent over January 2016.