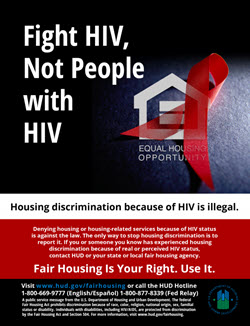 Every year HUD recognizes Fair Housing Month in April. This year, the Office of HIV/AIDS Housing, which administers the Housing Opportunities for Persons With AIDS (HOPWA) program, worked closely with the Office of Fair Housing and Equal Opportunity (FHEO) to produce a poster to address housing discrimination because of HIV. The poster is available for download and we encourage HIV housing providers to display it in a place accessible to HOPWA-eligible clients. Visit the FHEO Outreach Tools Page to download the HIV housing discrimination poster.

The poster states that housing discrimination because of HIV is illegal. Individuals with disabilities, including HIV/AIDS, are protected from discrimination by the Fair Housing Act and Section 504.

Section 504 of the Rehabilitation Act of 1973 prohibits discrimination on the basis of disability in any program or activity that receives federal financial assistance from HUD or in programs conducted by HUD. The Fair Housing Act prohibits discrimination in many different types of dwellings and, unlike Section 504, applies regardless of federal funding. Such housing may include single-family homes, apartments, condominiums, nursing homes, assisted living centers, group homes, homeless shelters occupied or intended for occupancy as a residence, and school dormitories.

If you or someone you know is experiencing housing discrimination because of HIV/AIDS or another protected characteristic, you can file a complaint online or contact HUD by phone:

You may also contact the nearest HUD office. You have one year after the alleged discrimination occurred or ended to file a Fair Housing Act complaint with HUD and generally 180 days to file a Section 504 complaint, but you should file it as soon as possible.

More information on fair housing rights can be found in the Fair Housing Act and on HUD’s webpage for Fair Housing and Equal Opportunity.

HUD’s website also provides information about Section 504 and about the Section 504 complaint process.

In addition, Title II of the Americans with Disabilities Act prohibits discrimination on the basis of disability in services, programs, and activities provided by State and local government entities, which generally include public housing agencies. Title III of the ADA covers public and common use areas, such as rental offices, at housing developments when these public areas are open to the general public. Further, some state or local laws offer legal protections based on additional protected characteristics, such as source of income.

Learn more about the HOPWA program on the HUD Exchange.